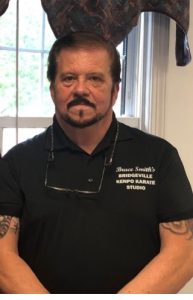 Bruce has lived on the Eastern Shore since 1966. He graduated from Wicomico Sr. High School in 1968. He served in the U.S. Air Force (Vietnam Era) from 1969-1972. He is also a musician, having played in many bands around the Eastern Shore both before and after his military service. Mr. Smith has been training in the art of American Kenpo Karate system since 1974 (45 years). He is the Chief Instructor and holds the rank of 8th Degree Black Belt and teaches classes in his studio, Bridgeville Kenpo Karate, which is next to his house on Elm Street. Mr. Smith moved to Bridgeville in 2004, where he worked as the Head of the Security Company providing Security for Heritage Shores for many years. He lived in Phoenix & Mesa, Arizona and Las Vegas, Nevada from 1974-1988 where he started his Kenpo Karate Training. He worked as a Professional Celebrity Bodyguard for 14 years. Mr. Smith was also the director of Security for Celebrity Theatre in Phoenix, AZ and worked in all aspects of the Security field, along with being the Head of Security and Executive protection specialist for different limousine companies. Bruce has been a professional celebrity bodyguard for Lionel Richie, BB King, George Carlin, George Michael, Robin Williams, Rodney Dangerfield, Tom Jones, The Jets, Def Leppard, Cyndi Lauper, The Scorpions and many more. Mr. Smith moved back to the Salisbury area in 1988, where he worked as a Folk-Art Wood Carver with a friend in a company called Noah’s Ark and from 1989-2009 Mr. Smith taught American Kenpo Karate in his school in Salisbury, Maryland. Bruce is also the founder and President of the World Organization of Martial Arts Athletes and the Head of Team America, the United States Premiere International Martial Arts Competition Team. He is also an International promoter. W.O.M.A.A. promotes in International Competition (the WOMAA World Martial Games) in a different country (i.e.: Australia, Ireland, England, and other European Countries) every year, with over 44 member countries vying to compete. Mr. Smith is also a Federal Firearms Licensee and a Firearms Instructor holding classes in Basic Pistol, Carry Conceal Classes, Home Defense, Vehicle Firearms Tactics, Dealing with the Mass Shooter threat and more. Mr. Smith is also a Leather Craftsman. Bruce is the newest member of the Bridgeville Commission having replaced Patricia Correll after she retired. He is excited to serve the Bridgeville Community.