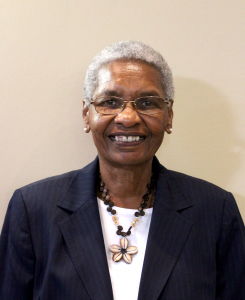 Dr. Marlene A. Saunders has always regarded Bridgeville as her home even though she attended public schools in Wilmington, Delaware until she graduated from P.S. DuPont High School in 1963.  From early childhood until she graduated from Delaware State College (now Delaware State University), Dr. Saunders lived in Bridgeville with her aunt and uncle, William and Cora Gilliam during the summer months. Her great-grandfather, grandmother and aunt were born and raised in Bridgeville.  Her mother and uncle lived with the Gilliam’s and attended the Phyllis Wheatly School. Dr. Saunders has fond memories of rural community life in Bridgeville which included going to camp meetings, attending summer bible school at Mt. Calvary United Methodist Church and eating ice-cream on the weekends at the train station in Bridgeville.   Dr. Saunders returned to Bridgeville to reside permanently in 1990.

Dr. Saunders earned her B.A. degree in Sociology from Delaware State University) in 1967. Subsequently, she earned the MSW degree and her doctoral degree in Social Work from the University of Pennsylvania School of Social Work (now School of Social Policy and Practice) in 1972 and 2001, respectively.  As a social worker, Dr. Saunders provided a variety of services to abused and neglected children, the elderly and Hispanic and African American communities in Delaware and Philadelphia, PA. In 1985, she joined the faculty at Delaware State University where she worked for 29 years before retiring as Chair of the Social Work Department in 2014.

Dr. Saunders is a member of the Mt. Calvary United Methodist Church in Bridgeville, DE. In addition, she is a member of several boards, including the Southern Delaware Alliance for Racial Justice, Women’s March Sussex, Delaware and Zoë Ministries.

Dr.  Saunders has always believed that everyone can and should play a role in making sure that Bridgeville is a safe and attractive for all residents.